For almost as long as clearly-defined industries have existed, at least in their modern form, there have been professional councils, societies, associations and industry bodies to regulate them. The scope and level of control and influence that these organisations have vary greatly, from being self-regulating and only being peripherally involved – acting only as gatekeepers – to drawing up mandates, standards and even shaping legislation.

The existence of such regulatory entities can be traced back to Industry 1.0 and the professionalization of industries, which set certain rules and criteria for anyone wanting to join an industry as a professional. This approach ensured that the applicant had the necessary skills and qualifications in order to become, for example, an engineer. Later associations also sought to standardise for example tools and techniques between industry members. What started out as a means to eliminate competition and become a monopoly, in reality led to industries becoming much smarter, more organised and, most importantly, held accountable.

Today, however, industry bodies have the role of watchdog, often working in conjunction with government organs to ensure that the public enjoys products or services that meet certain stringent standards to make them safe and reliable for their particular application.

So, how do our bollards fit into this?

As we’ve seen countless times throughout history, even the most festive of occasions can be marred by tragedy and, in an age marked by seemingly constant surveillance, it’s all too easy to be lulled into a false sense of security. Most of us go about our daily routine without giving much thought to security because we are used to life happening according to a set, linear sequence that we can predict and control.

But life, by its very nature, is unpredictable and our expectations of how things should play out can quickly be disrupted and destabilised when something comes in from the environment that poses a threat to the public’s wellbeing.

While public safety has always been high on the global agenda, the past two decades or so have seen the world taking a much tougher stance on these issues as new security threats emerge and the protection of people and buildings drive dialogue at all societal levels.

The world today is markedly different that it was a mere century ago, and widespread urbanisation has forever changed the social landscape. Cities are not only the playground for those seeking entertainment, but they are economic hubs and home to millions of workers as well as those who permanently live there. Whether for work, play or as a residence, the city is the quintessential public space. 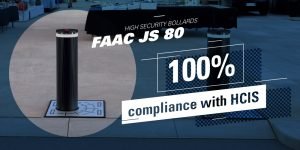 But heavy lies the crown.

The rise of concerted vehicle attacks in recent years has cast a pall of fear over society – not only in cities but in any human settlement – with public spaces being more vulnerable than ever before.

Now is your chance to play your part in meeting the ever-growing demand for security in urban areas with the new FAAC JS80 bollard. Give your clients a security solution that bears the mark of quality, safety and reliability from the country’s highest industry authorities and safeguards against the most significant threats facing public safety today. The FAAC JS80 is your clients’ assurance of peace of mind knowing that it conforms to the most stringent and uncompromising standards as set by official regulatory offices.

Laboratory-tested and expertly engineered, the FAAC JS80 bollard has been designed to provide excellent protection against vehicle ramming, and has been made in 100% compliance with the Kingdom of Saudi Arabia’s Ministry of Interior as well as the HCIS’s Industrial Security Directive. Compliance with these directives means that the bollard adheres to all of the country’s statutory requirements and is guaranteed safe and effective. The bollard is made to our exacting standards and goes through rigorous testing to ensure the highest level of safety and reliability in any environment. Ruggedly built, the JS80 bollard is a stalwart watchdog that confronts perimeter security challenges head-on and provides ironclad protection in critical areas such as banks, public squares, marine areas, government buildings, embassies and diplomatic missions while also regulating traffic.